Hit the Road to Support Women in Craft

Discover oyster history and culture in this educational and delicious road trip heading south for the day.

Start your road trip by taking a crash course in oyster history and culture at St. Clement’s Island Museum overlooking St. Clement’s Island, the site marking the landing of Maryland’s first English settlers in 1634. The museum boasts exhibits exploring Maryland’s early history along with an exhibit in the Potomac River Room called A Glimpse into the World of the Oyster Industry in St. Mary’s County. The oyster experience is enhanced by an outdoor exhibit of an early 20th-century waterman’s boat.

Piney Point Lighthouse was built in 1832 and is the oldest lighthouse on the Potomac River. The park itself contains the Potomac River Maritime Exhibit showcasing historic wooden boats watermen used when they harvested seafood, such as oysters, from the waters of the Chesapeake Bay. A skipjack with a dredge for catching oysters and a bugeye boat are also on display. For children, the park has a playacting area, which they can use to mimic watermen who used the tonging method to harvest oysters.

The Calvert Marine Museum will immerse you in maritime life. The harbor features a variety of Chesapeake-built boats, and you can get out on the water on the Wm. B. Tennison or skipjack Dee of St. Mary’s. For those energetic enough to make the climb, the Drum Point Lighthouse provides a bird’s-eye view of the water. Cove Point Lighthouse is also a part of the museum and happens to be the oldest continuously operating lighthouse on the Bay. 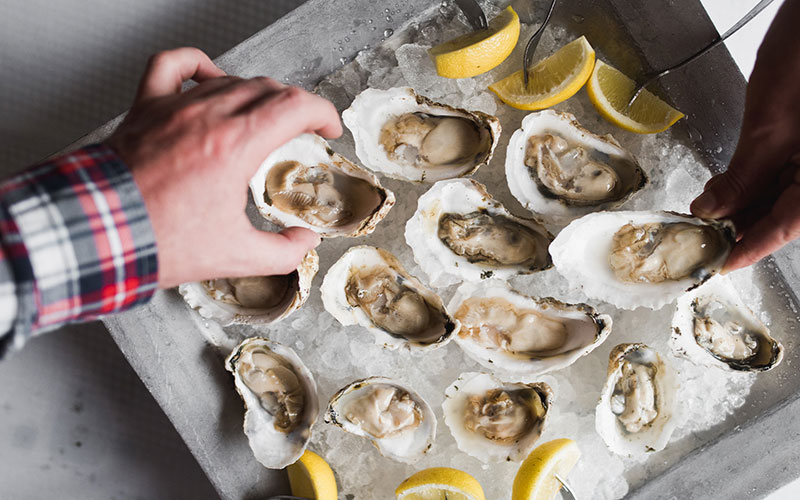 The Pier is a historic landmark restaurant with panoramic views of the Patuxent River in Solomons, one of the quaintest towns on the bay. Indulge your cravings with oysters served raw, steamed, or fried with an Old Bay flavored batter. For something a bit different and with a kick, sample the Pier Oysters, a spicy starter with jalapeno, bacon, and cheese.

Content originally featured in “Bay-Raised and Ready to Slurp: Oysters in Southern Maryland” by Joyce White.

6 Date Spots for Romance and Fun in Harford County

How I Spent a Weekend in St. Mary’s County

Dining Experiences Worth the Drive in Charles County